About a decade back we bought a modern chandelier, powered by five 20w G4 halogen capsules. It’s a really lovely feature light, covering the hall, stairs and landing. Unfortunately, in the intervening time, electricity costs have rocketed, and we’ve all moved to lower-powered lighting using things like compact florescent lamps (CFLs) which cost a fifth of what old incandescent bulbs did to run. That chandelier is now the only incandescent fitting left in our house, and by far the most power hungry to run.

As a result we’re careful to turn it off whenever we don’t actually need it. As this defeats the whole point of having a feature light like a chandelier, I’ve been trying for some time to find a way to reduce it’s power consumption.

Newer technology halogen capsules were the first choice; the original 20w bulbs got switched out for 15w equivalents, that produced approximately the same light. But boy were they expensive, and they lasted 1000 hours at best – a year or so. So I’ve still been looking for alternatives; CFL was never going to work aesthetically, but LEDs seemed to hold promise … though the light output of early LEDs was not great, and no-one supported the G4 form factor anyway.

But recently I noticed manufactures were trying again. Mostly they were building simple circuit boards with a few high power SMD LEDs on each side. I don’t doubt that they work, but I suspect the beam angles would make the field of light very patchy. They look awful too!

And then I noticed these: 24 SMD LEDs mounted onto a neat cross-shaped circuit board. Nominally 360 degree beam angles, with the whole thing encapsulated in some type of silicon for physical robustness. Finally, something worth the gamble. 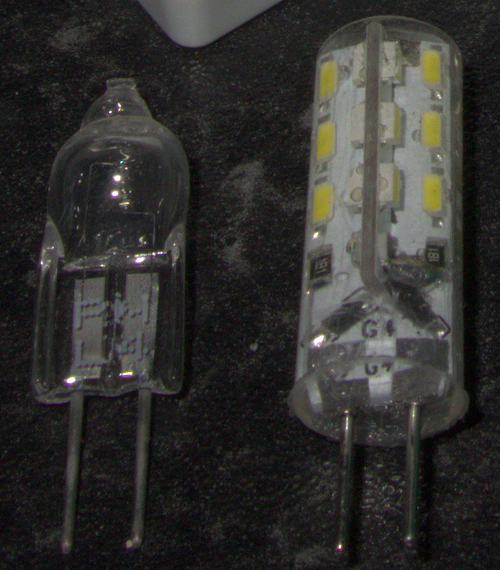 The existing 12v halogen transformer is apparently not suitable for driving LEDs so I picked up a cheap 12W LED driver from Amazon to replace it. In total, a little over £20 for 5 LED G4 replacements, the LED driver and the P&P. 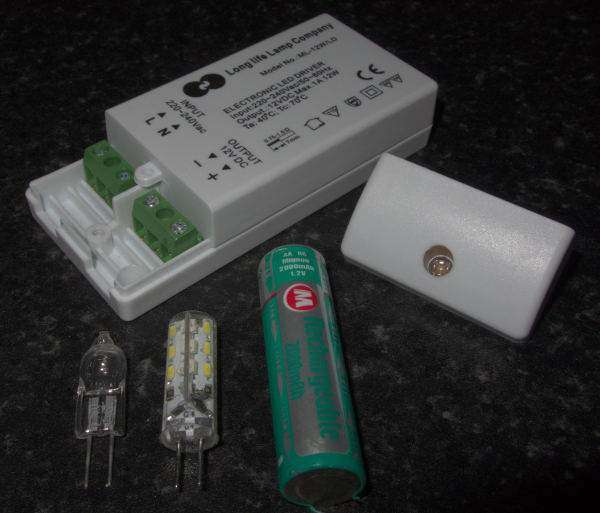 And the result is pretty good. The LEDs are extremely bright, and look simply wonderful in the chandelier. However the nature of LEDs is that they are extremely directional, producing a tight beam of light. When you’re in alignment with the output beam the LEDs are extremely bright. However, off-beam they are much less bright that an incandescent bulb that acts more like a point light source, radiating in every direction. The fact that there are 120 little surface mounted LEDs each pointing in slightly different directions helps enormously, but the overall room illumination from the chandelier still just isn’t as bright as it was with the old halogens.

It is, however, more than bright enough, and is only using 7.5w rather than 100w to run, so we can run it as much as we like now. That’s a pretty good compromise in my book!

Update: I was asked for a picture of the end result. So here it is, taken at night, with the chandelier lit up, which makes the picture look a lot darker that it is in real life. The walls are also a light purple colour, accentuating the cold blue-white colour of the LED’s: