And on the 10th July (was it really so long ago?!) we came across this little beauty, also in the undergrowth around the house: 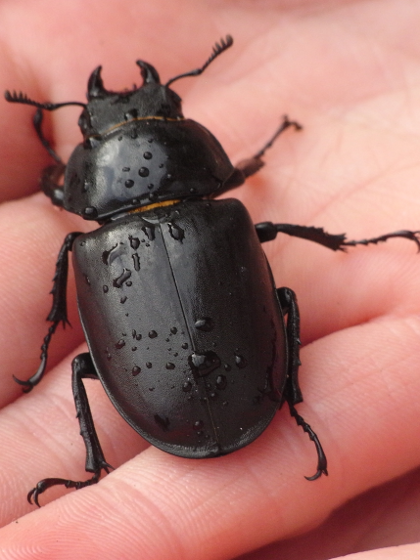 Hopefully this means the continuation of their species, at least for this year.

For the last few days we’ve had this not-so-little chap keep turning up at different locations around our garden:

At about 3inches (8cm or so) he’s pretty huge, and very impressive. It’s taken a good 6-8 years for him to reach this final stage in his life, and he really needs to find a mate this summer, because he won’t make it through the winter.

Sadly these beetles are becoming more and more rare. I’ve only ever seen one a few times in my life. They’re considered endangered across most of Europe, and are a protected species in the UK. Given that we seem to keep rescuing him from various “scrapes” that he gets himself into, I can see why. Yesterday we found him stuck on his back on the front doorstep, waiting to be eaten by any passing bird. Today I rescued him from some flower pots that he’d apparently fallen into. Although he’s an amazing sight, I hope I don’t see him again, and that he just manages to get on with his life, and continuing his species.

As many of you will know, over the last 3 or 4 years I’ve become increasingly concerned with what is often referred to as “Green Issues”, and in particular the environment and how we are impacting upon it. I guess it’s one of the results of getting older and having kids – a case of suddenly realising that what we do now is going to affect them, and even their children. Now this isn’t to say that I’m particularly fanatical; I’d like to think that I’m a pretty pragmatic kind of guy. But I do try to do what I can, even though that’s pretty much limited to trying to reduce my personal impact on the planet, and finding ways to reduce the impact of IT on our planet (this latter one because its part of my day job, working in emerging technology for a large multinational IT company).

So I was really interested to come across this little device recently. Although I’ve seen such things before (usually at high prices), this is the first one that I’ve seen that can handle proper 3 phase supplies, and also has a PC interface on it, allowing it to be integrated with a home automation system.

The companys business model is to sell these (hopefully in huge quantities!) to the energy supply companies, who will then either sell or give them to end-user power-consumers in an effort to help them to reduce their power consumption. This model is being helped (in Europe anyway) by the expectation of legislation that will require energy supply companies to find ways to help energy consumers to reduce their power consumption (and hence CO2 emissions). Unfortunately you can’t (as an individual) buy one just yet, but fortunately (for me) the company I work for is involved in a trial using them, and so I was allowed to buy one at the price an energy supply company would pay. I don’t believe I’m allowed to say exactly what that was, but let me just say that it was a pleasantly affordable deal.

Setting it up took about 60 seconds. Hook the current clamp around one of the meter tails (the wires running from the supply companys electricity meter to my fusebox) and turn on the wireless transmitter. Plug the display unit into my server with a serial cable, and then into the mains for power. Power consumption numbers appear on the display unit – simple as that. I must admit that I’ve not done a detailed check on the unit for accuracy, but a few quick empirical tests show that it’s definitely close enough that I’m happy to believe the accuracy claims on their website.

Reading the data from the serial port is a small matter of a little bit of perl. The data itself is encoded in a tagged text format, similar to XML, which naturally makes it trivial to parse in a perl script. So its easy to extract the interesting bits of information, and store them in a round robin database, where they can then be analysed, graphed, or whatever. In my case I’m extracting the instantaneous power consumption figures for the three cable clamps (even though as a domestic user, I only have single phase) and the temperature at the display unit. This means I can combine the room temp of my study (where my server and the display unit are) with the internal temperatures of my server, and see how external temperature affects those, as well as watching how my electricity usage varies over time.

Of course, the trick here is to use this thing to lower my energy consumption. But that doesn’t really mean to stop doing things. We will still need to run the washing machine, the tumble-dryer, the fridge and freezer etc, and we’ll still want to boil water in the kettle. Because although all of those things take a “lot” of power, it’s power that’s being spent on useful work. Where we can (and should) be concentrating is the “resting” power-consumption of the house. The stuff that’s running 24×7, and doing nothing useful, that could be shutdown. And yet, to my surprise, despite having quite a lot of general stuff that does run 24×7, my base resting power consumption is pretty low (well, compared to some of the other people on the trial, anyway!)

Overnight the numbers are under 200w. And that includes my server, my printer, my ADSL/wireless, my 24 port switch, the central heating controls, the alarm, and a nightlight for the kids, plus a surprising number of “standby items” including alarm clocks, radios, 2xTV, set top boxes, various cellphone and laptop chargers, etc etc. And the big ticket items are the ones that it would be difficult/impracticable (for me) to change – namely the server and its associated support networking. So it seems like we’re doing a pretty good job at the moment, though I think I might try unplugging some of the easily accessible stuff, and see if I can half it.

After all, 100w saving doesn’t sound a lot, but when its over a whole year, that’s 876kwh. Nearly £90 of electricity ($170). And there are 25 million households, and a lot more commercial/industrial establishments in the UK who could attempt this …

If you’re interested, you can see near-realtime graphs of all this data here.

This weekend we went away and hired a small cottage on a working farm. My family needed a break from the normal routine of dealing with my wifes cancer. It was great – miles from anywhere, nice friendly farmer and his family, lovely comfortable cottage, and nothing else. My kids played with the farmers daughters, helped to muck out the cows, fed the lambs, searched for the free-range eggs, and rode horses.

My wife and I chilled out and ignored the world. And I did what I always do when I’m on holiday, and demolished a new book.

Except in this case it was the most terrifying book I have ever read. This is the ultimate horror story. Because it’s talking about the future that we’re bringing down on ourselves. I urge you to go grab a copy, and read it. It’s packed with scientific evidence, and quotations from scientific papers, but presented in the most readable fashion you could ever want. You owe it to your children, and their children.

Last weekend I saw two bumblebees. That would be in January. Today I saw a butterfly. This is *months* before I would normally expect to see either of them.

What on earth have we done to our climate?